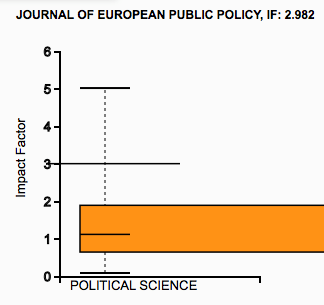 Thomson & Reuters has released the new Journal Citation Report (JCR), which include the impact factor scores for 2016. JEPP is listed in two sections: Political Science and Public Administration.

JEPP has achieved its biggest ever annual increase in its two-year impact factor score from 1.964 (2015) to 2.982 (2016). This the highest score JEPP has ever received in its history (as the Journal approaches its 25th birthday). This brings the journal into the top 10 in both categories: rank 9/165 on the Political Science list and 4/47 in the Public Administration list. These results could not have been achieved without the hard work of JEPP’s family of authors and referees, to whom the Editors are greatly indebted.

A few months ago, Scopus has introduced a new journal metric, CiteScore, which is calculated on the basis of a three-year citation window (instead of two years covered by the standard impact factor measure in the JCR). JEPP is listed in the Sociology and Political Science category, comprising 973 journals. CiteScore for 2016 ranks JEPP at position 31 of 973 (putting JEPP in the 96th percentile), with a score of 3.10.

JEPP is also among the top twenty political science journals listed in the 2016 release of Google Scholar journal metrics in the Political Science category (in 6th place, with an h5-index of 39).